How long have you been designing t-shirts?
So may that I have begun to lose count.

What are your sources of inspiration?
I’m in to the usual geek stuff, anime, games, comics etc. I particularly enjoy designing shirts featuring sci-fi tech and vehicles.

What advice would give to artists just starting out?
Just keep at it, embrace what you’re good at and know your limits.

As an artist, what is your typical day like?
It’s usually just a matter of finding time whenever I can to work in between looking after a young family.

As a child, what was your dream career?
Anything involving art, so I guess I made it.

We all have a mentor. Who was yours?
I don’t think I could go as far as saying anyone has been a mentor to me. I’ve pretty much had to teach and motivate myself. I admire alot of artists though, who have been great sources of inspiration.

Which do you prefer: video games or board games?
Video games.

After having suffered some kind of setback, you suddenly acquire a super power. What would it be?
The ability to grow a full and thick head of hair.

If you could live out your life inside a film, TV series, comic book, graphic novel, book or video game, what would it be?
I want to be a Ghostbuster so bad!

You find the key to the TARDIS. Where would you first travel and to what year?
I’d been more interested in seeing the future, so let’s start with maybe 50 years from now. 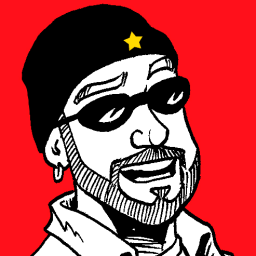