How long have you been designing t-shirts?

What are your sources of inspiration?

There is no doubt that I have been influenced a lot by a number of great artists. The list is long, but the most influential are probably Matt Groening (especially with his “Life in Hell” series). In terms of storytelling, I need to name a few authors who have inspired me a great deal with their writing for comics: Grath Ennis (Preacher), Warren Ellis (Transmetropoli tan) and Grant Morrision (The Invisibles). As a European, I got in touch with a lot of French comics. One of my strongest influences was the works of Lewis Trondheim, especially his series “Dungeon” and Moebius' “The Incal.”

What advice would give to artists just starting out?

Keep on trying and trying and trying! I submitted almost 30 designs before my first one was printed. Persistency and the will to learn and accept critique by others is vital. Open your mind for new concepts, but don’t leave your own style and love for certain topics – don’t bend to the Star Wars theme just because it might sell well. Study other people’s art. Read articles. Deal with the industry. Be an artist AND a businessman/woman. And sometimes, it’s ok to sell yourself out a little. Just don’t do it too often 😉

As an artist, what is your typical day like?

I try to have an 10 – 4 job, just because it works well for me. I have space in a shared office, there I work with other artists/designers. In the evening, I try to relax, do some sport, watch a movie, play a game, meet friends.

As a child, what was your dream career?

Being an artist wasn't always my first choice. When I was very little, I wanted to become a grave digger because I was curious how a real skeleton looks like. Nobody ever told me that I could just go into a museum or a church's ossuary to see those.

We all have a mentor. Who was yours?

A couple of different people who took the time and efford to give me the right critique at the right time in my life. Comic artist Joerg Vogeltanz from my hometown, Darick Roberston (artist for “Transmetropolitan”) , Christian Moser (German artist who died two years ago, i was very sad) and various teachers when I studied.

Which do you prefer: video games or board games?

Extraterrestrials are coming to destroy the Earth. But, in a moment of mercy, they let you do one last thing. What would you do?

Watch “The Holy Grail” for the 25th time.

After having suffered some kind of setback, you suddenly acquire a super power. What would it be?

As an insomniac, I want the power to have deep, relaxing sleep whenever and wherever I want to.

You have one day to spend with a famous person (still alive, ideally). Who would it be?

I want to meet Neil Degrasse Tyson and let him tell me all about science!!! And maybe we'll visit all kinds of science labs and look at amazing science things. SCIENCE!!!

If you could live out your life inside a film, TV series, comic book, graphic novel, book or video game, what would it be?

Sooo hard to decide! Science officer on Deep Space Nine? Or maybe a member of the Firefly crew (preferable not the pilot ;)). I could also be A mighty pirate (TM) at Monkey Island! Or a killer rabbit n “the Holy Grail”.

You are now Master of the Universe. What would your first divine deed be, O All Powerful Master?

Build black-hole-speed-highways between all planets with life on them, and make all sentient beings super empathic and a bunch of hippies os no more horrible violence.

You find the key to the TARDIS. Where would you first travel and to what year?

I would travel back to the 1920ies and visit my favorite author HP Lovecraft to have a chat about horror literature, the world and convince him to live healthier so that he had lived longer.

What answers do you have to the mystery of life, the universe and all the rest?

There is no black and white, just billions of grayscales. There is no easy answer to anything. Also: 42, of course. 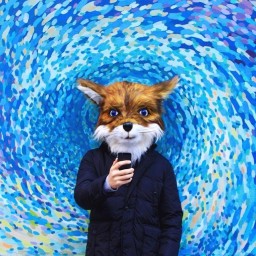